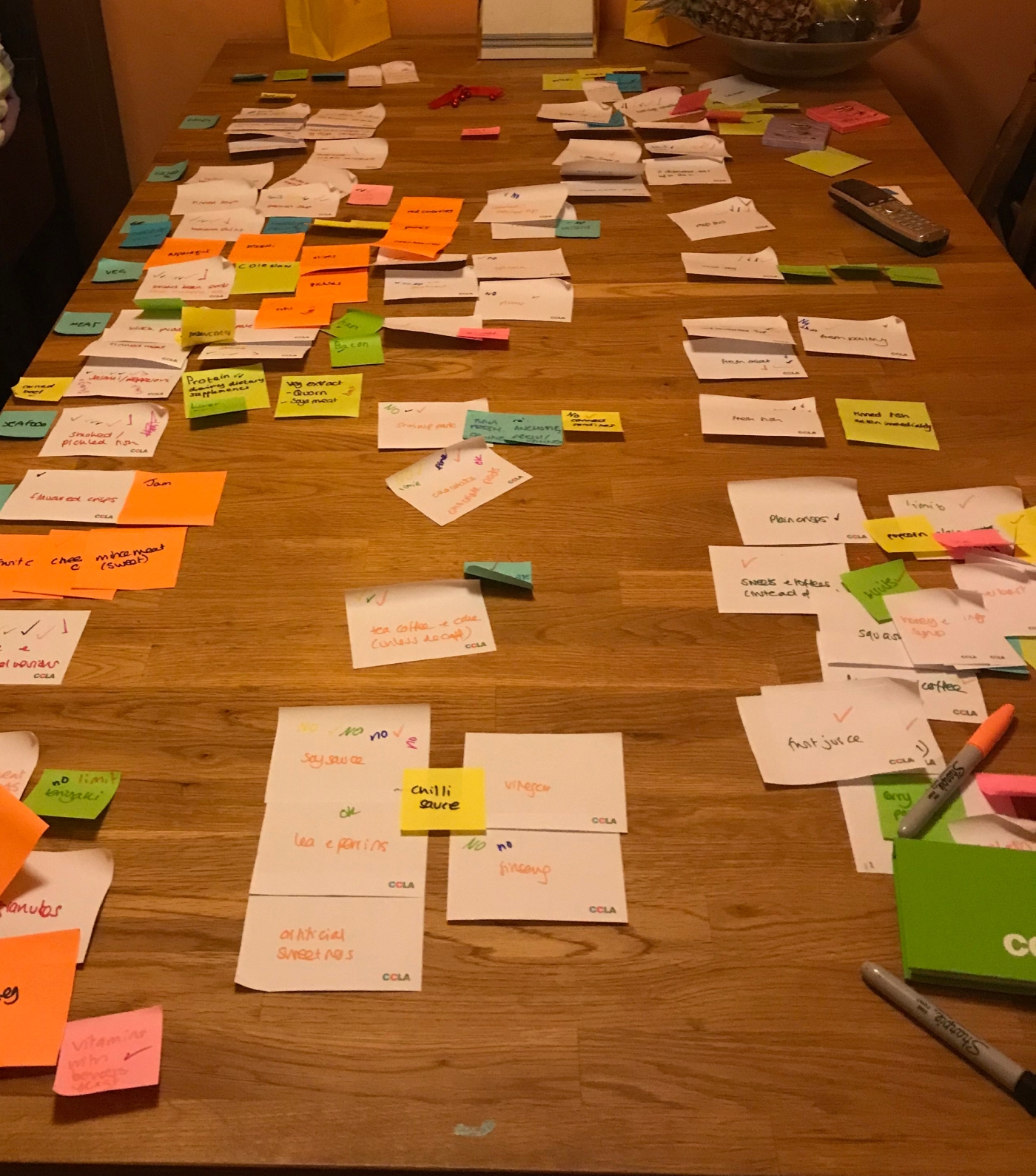 The first cycle of chemotherapy is scheduled to begin on the 10th January. Barring allergies, poor blood counts or other surprises along the way, I will have six cycles of chemotherapy, with each cycle lasting six weeks.  If everything stays on schedule, that’s 36 weeks. 252 days. It’ll be mid-September at the earliest before I’m officially done with chemo. That seems like…. a long time. It’s a pregnancy amount of time.

The cycle plan is that on day 1, two drugs will be administered in the hospital chemo day unit; Vincristine via IV, and Lomustine orally. The hospital will then give me a 10 day supply of Procarbazine capsules to take at home. There’s no treatment on days 12-42 and then you’re back to day 1 again.

Maybe it’s unusual, but I have never witnessed anyone undergo chemotherapy. Whilst some friends have had it, they don’t live nearby and they did not really talk about their experiences. I genuinely have no idea what to expect from it beyond what you see on telly, and that is probably as realistic as labour is on telly. Sarah reassures me that I’ll be fine, but it all has the air of something mysterious and dreadful. The treatment that is worse than the ailment. A last resort. I fully expect to look like a line drawing of a starving Dickensian wretch with phossy jaw within seconds of the IV being set up. I am proper shitting it.

How do you plan for anything? The nurses say you work out when your bad days will be after a couple of cycles and then it’s easy. OK, but what does a bad day involve? How is it bad? What do you do on the days with no treatment? Is the treatment still working, doing cell type stuff in the background? Why does it take six weeks? I don’t understand any of it.

As you may have picked up already, the best plan I can come up with so far is to think of it like a pregnancy. Let’s look at the similarities:

And now the differences, where we see that actually chemotherapy is much better than pregnancy:

This is all very reassuring, but not quite sufficient.  So what do you do when you’re shitting it and don’t understand anything? You start making lists and imposing some goddam order on the chaos by jingo. Whether those lists and that order are relevant is not really the point. Displacement activity FTW! The detail I choose to focus on is tyramine. Tyramine is a by product of the amino acid tyrosine which is found in high protein foods such as cheese and meat. Our bodies metabolise tyramine using the digestive enzyme monoamine oxidase (MAO). However, some drugs, such as old fashioned, (pre SSRI like prozac) anti depressants inhibit the production of  MAO. When taking these drugs, any tyramine eaten can build up and cause blood pressure to rise to the point where you have a hypertensive crisis, so it must be strictly avoided.  Apparently, this is alluded to in the Silence of the Lambs – when Hannibal Lecter tells Clarice Starling that he ate someone’s liver with fava beans and a fine chianti, the fact that he specifically mentioned such tyramine rich foods is a coded reference that he’s off his meds. Nice trivia fact and everything, but you’d think that being a murderous cannibal is indication enough that he’s off his chuffing meds. No need drop coy hints about wine choices.

Anyway, Procarbazine, one of my chemo drugs is an MAO inhibitor. The Macmillan website says:

Interaction with alcohol and some foods

It’s best to avoid alcohol, alcohol-free beers and wines and certain foods when you’re taking procarbazine. These can cause a reaction that can make you feel sick and cause headaches, sweating, drowsiness and breathing problems. Avoid foods such as mature cheeses, salami, and yeast or beef extracts (Oxo ®, Bovril ® and Marmite ®) and over-ripe fruit. Your nurse, doctor or pharmacist will give you more advice on foods to avoid.

Avoid foods “such as…” What do you mean ‘such as’? What is this ‘such as’ class of foods? The ones listed don’t have anything obvious in common.  My brain is already broken, an incomplete list of foods not to eat is not enough. Tell me what I should eat and I’ll do that. No nurse or doctor can give me more advice. They generally point me straight back to the original Macmillan page. This requires research. To the internet, Batman!

As usual, the internet is more hindrance than help. Multiple lists of foods containing tyramine exist. Some are specific to PCV, others Procarbazine, others MAO-Inhibitor anti depressants and still others for people who suffer with a lifelong condition called Familial Autodysnomia which includes an inability to process tyramine. Every single list conflicts. Most are American and refer to foods I’ve never even heard of. Cheese is no good, but Cheez Whiz and Velveeta are OK. I would not know a cheez whiz or a velveeta if it bit me on the arse. You can take the girl out of management consultancy, but you can’t take the management consultant out of the girl. What’s required here is more research, compilation, and a weighted analysis of all the information.

Which is how you end up with a kitchen table and flagrant abuse of post it notes like this. 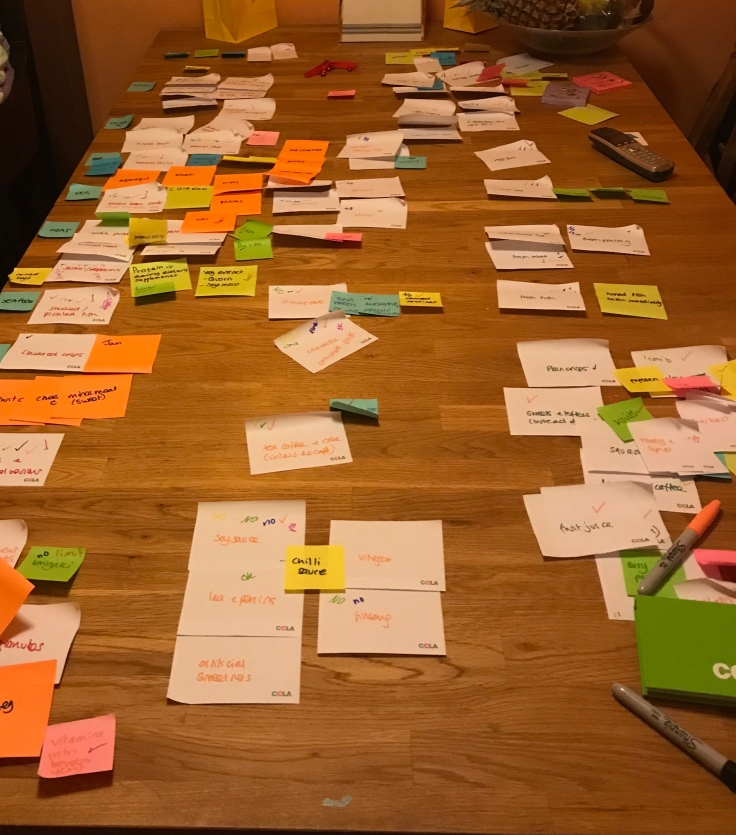 Colour coded, cross referenced and graded according to severity of reaction. This is all now consolidated in to a colour coded, interactive spreadsheet. Naturally. Right. Sorted. Order is now imposed. Everything is going to be OK.

After being given Christmas off, 2018 starts with a slew of hospital appointments. There’s a pre-chemo assessment on the 8th, first chemo session on the 10th and an MRI to see the effect of radiotherapy on the 12th.

The pre assessment is a bit unsettling. Little more than a blood test and chance to ask a few questions, the nurse leads me past the chemo day unit, which looks like a cattle pen filled with wipe clean comfortable chairs and drip stands.  After a quick chat about what will happen on Wednesday, I ask her about the foods list. She has no idea what I’m talking about.

Nurse: You mean so you don’t get food poisoning? Yeah, avoid soft cheese, the same kind of things you would avoid when pregnant.

Me: No, I read you had to avoid tyramine, so even hard cheese is no good.

Nurse: Never heard of that. I’ll go and ask the others.

Hmm. Why has she not heard of this? Either she doesn’t usually do brain chemo, or it actually doesn’t matter, or she doesn’t know what she’s doing. I glance down at my medical file notes while she’s out of the room and see that despite noting my height, weight and blood pressure upon them, the file actually belongs to a 66 year old man. I might look rough, but not that rough.  She comes back in the room.

Yeah, 9 out of 10 of us have never heard of it. The other one thought she’d heard something about that with PCV, but couldn’t remember what to avoid. I’ll print the Macmillan information off for you.

That would be the Macmillan information that tells you to ask a nurse. She then told me to stop taking any vitamins and supplements in case they stop the chemotherapy working. I’m so confused. If supplements could interfere with the chemo’s effectiveness, surely eating the wrong foods, which could cause other problems is also important? But this team treat hundreds of people with brain tumours each year and must know what they’re doing?

I point out the error with my file, and it’s changed, but this appointment has certainly done nothing to assuage my nerves. Regardless, we’ll begin the year of chemo in 48 hours.