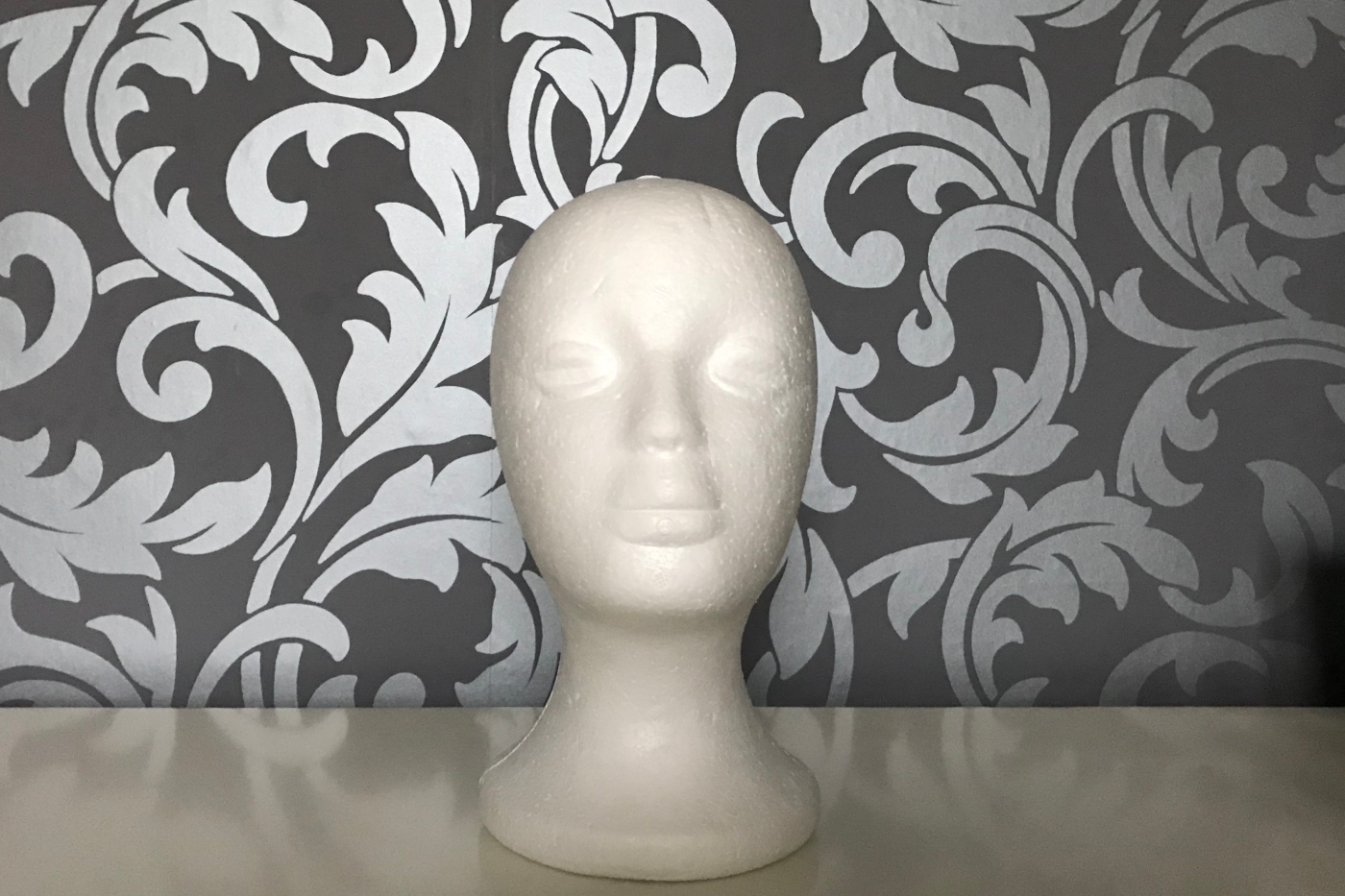 Facebook recently saw fit to remind me that this time last year, I was a cast iron, ocean going slapheed.  For those who don’t speak fluent Geordie, that is to say I was as bald as a coot, or as we shall see, as a bloke who shudders in fear at the words ‘Operation Yewtree’.

The algorithmic prod served two purposes; to reinforce my joy at having regrown an impressive, if slightly mad, thatch, and to dredge this post up from the drafts folder where it has languished for a mere 12 months, waiting for me to learn how to edit video.

Having googled video editing techniques, it’s probably going to be easier just to ask you to pretend the videos are smoothly shot, fluently narrated and not full of incomprehensible giggling fits. In fact, you’ll see that both videos are so chock-full of both that we gave up after a while and just switched to photos instead.

When I was bald, there were very few people I was comfortable being out and proud in front of. It was basically my immediate family, medical staff and other cancer baldies. For everyone else, I stayed covered no matter how hot the room or how itchy the wig. Now, with the benefit of a year’s distance from those days, I feel relatively comfortable sharing all these pictures in case they help someone else going through the same thing.

As you might expect, Losing your hair is a kick in the pants, but it does have its advantages. For example, you can:

So let’s have a look at some of these looks shall we? Buckle up. There are more photos of me in this post alone than I think have ever been put on the internet.

For context, this slideshow illustrates the journey and contains before, during and after photos.

Me at my baldest trying and failing to talk about wigs:

So here are the wigs you should have seen: 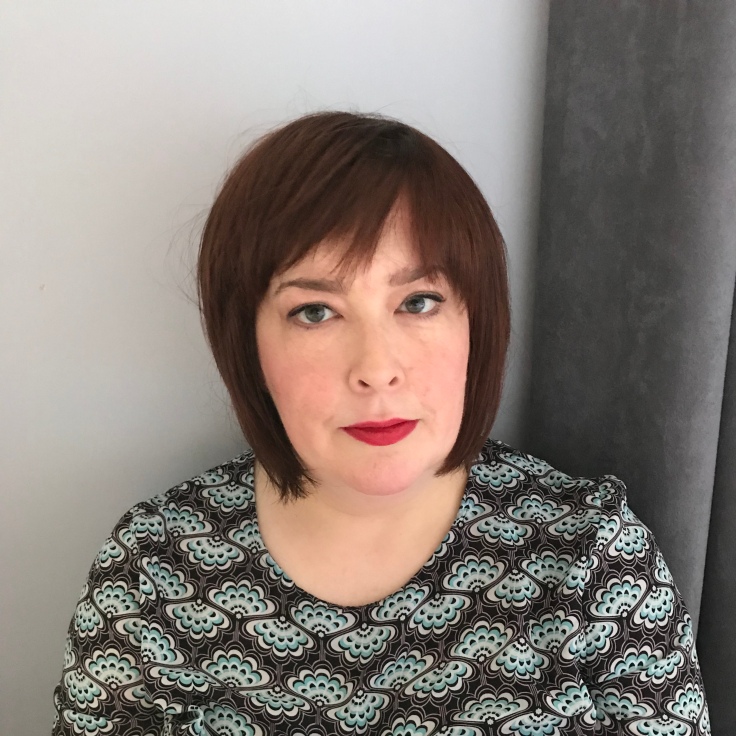 (plus unmade bed). I loved this wig, but the colour was horrendous on me. 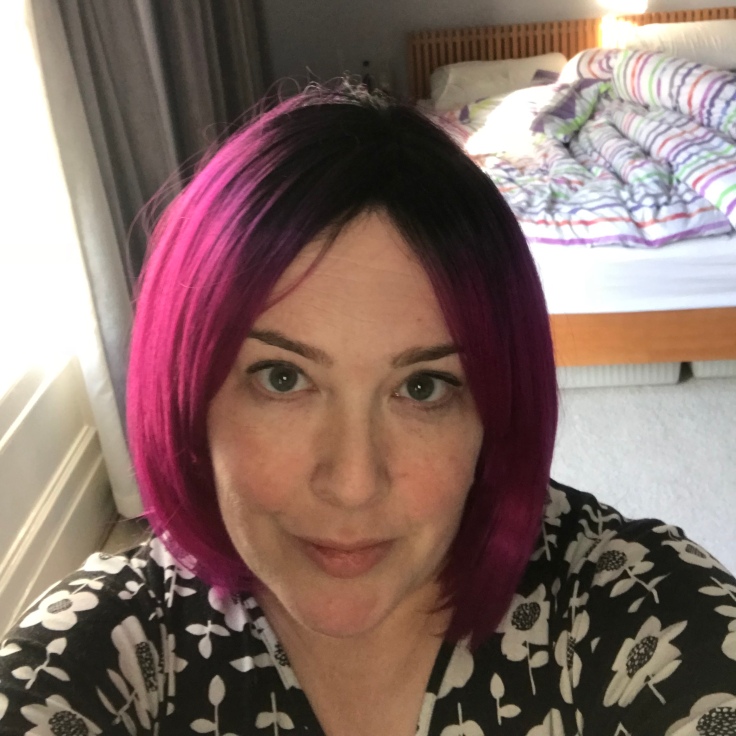 A wig that costs less than £10 means a hairline so obvious they can only be worn with hats. It was lucky I was bald in the winter because it would have been way too hot in the summer. These were the wigs I wore most often, and strangers would stop me in the street to say how much they liked my ‘hair’ which always made me panic. Also, the red one was so silky that if I moved my head too quickly when looking left and right to cross the road the beret would fly off in to oncoming traffic. 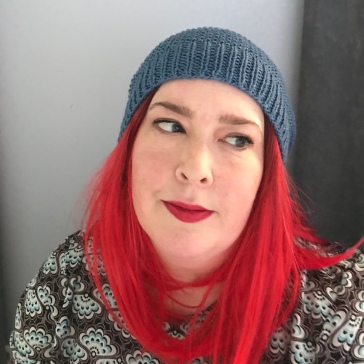 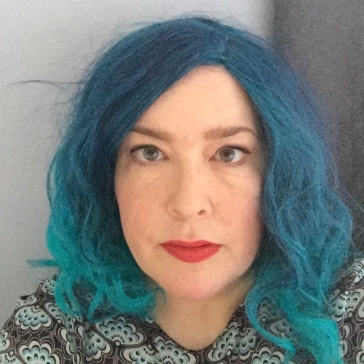 The Dora the Explorer

Hats are easy and quick to pop on, but few succeed both in and outdoors. Here I am, trying and failing *again* to talk sensibly about hats.

Favourite (in a comedy sense only) hat looks:

Not *a* Rembrandt. Actual Rembrandt himself. 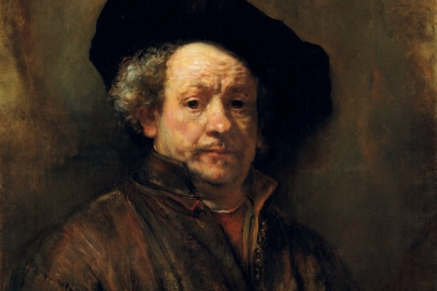 Bonus second look from this hat, which I knitted wrong. 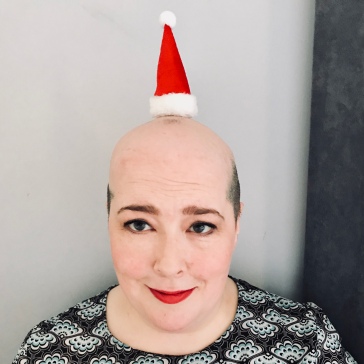 In the end, scarves were what I wore most often because they’re comfy, versatile and usually secure. There are tutorials for all these styles, and many many more on YouTube.

Creates volume around the head and easy to tie.

Strictly for indoor use only. 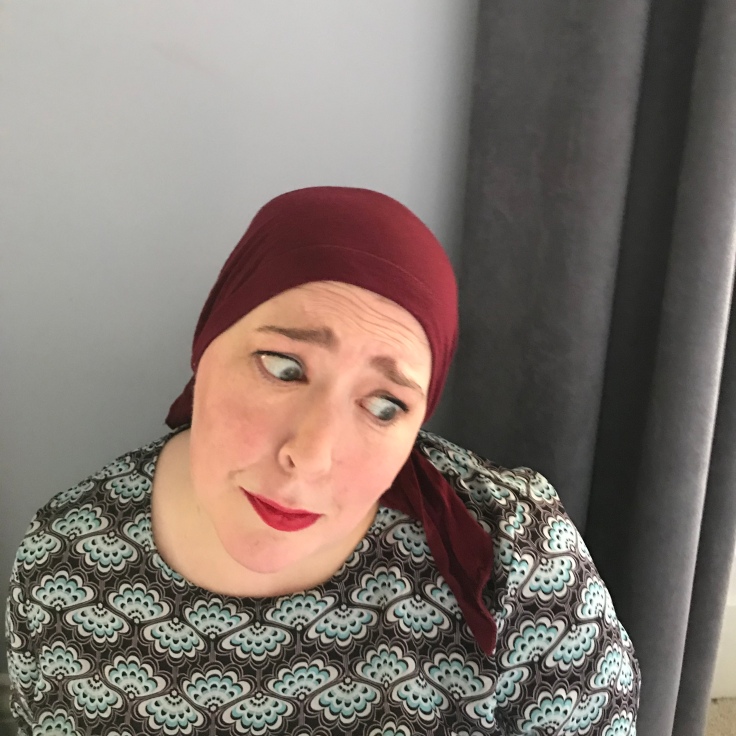 I only wore this out once because it made me much taller and I nearly knocked it clean off on every doorway I went through. Balancing it on your head improves your posture though. 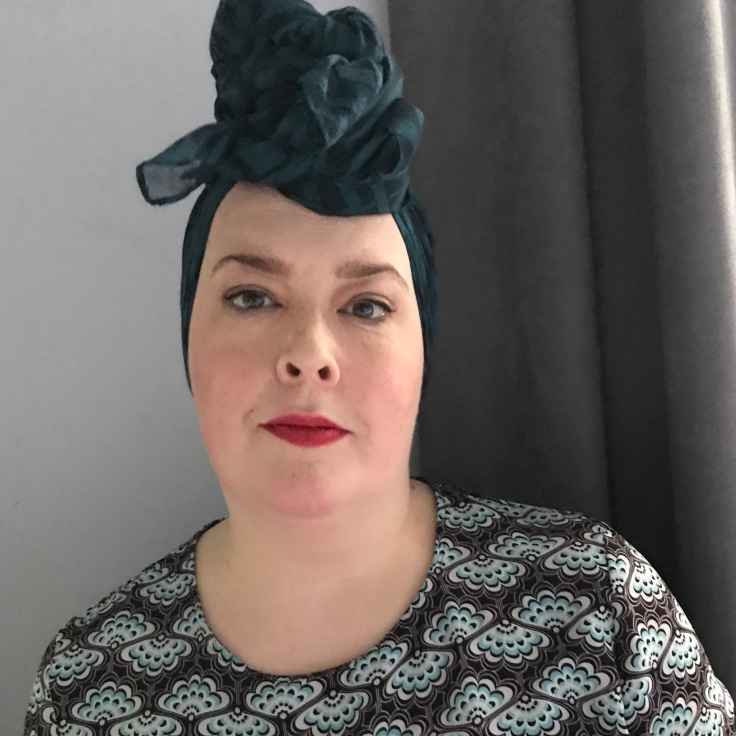 Can be made from and decent sized scrap of fabric. This was an old sundress.

The Why Yes, That is a Pair of Leggings on My Head

It’s a pair of leggings. On my head. 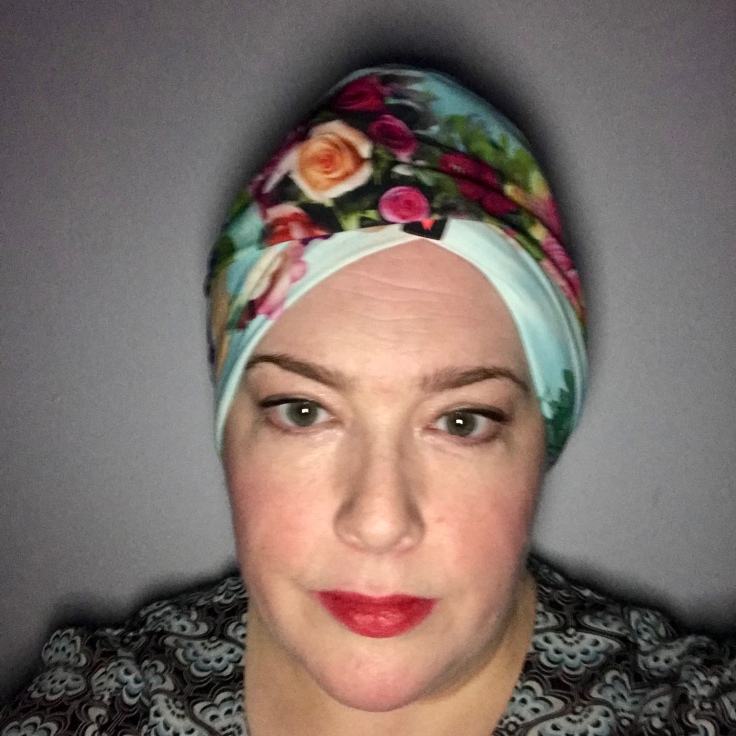 Yaaaay! Going bald was horrible. Being bald was not as bad as I thought it would be, but there was always a fear that my hair may never grow back. Much of my scalp was utterly smooth, and felt like an area of skin that will never, ever grow hair, like an ankle or the palm of the hand. So it was a huge and joyous relief when it did start growing.

My new hair is insanely curly and vertical on top, but poker straight at the sides and there is still a bald area around the scar, so it all adds up to a kind of schizophrenic vibe, but who cares? It’s hair.  I’ve not taken many pictures as my hair has grown, but shall take you through an illustrative journey nonetheless.

Loved this, but had to colour the bald patch in with root touch up spray every day. 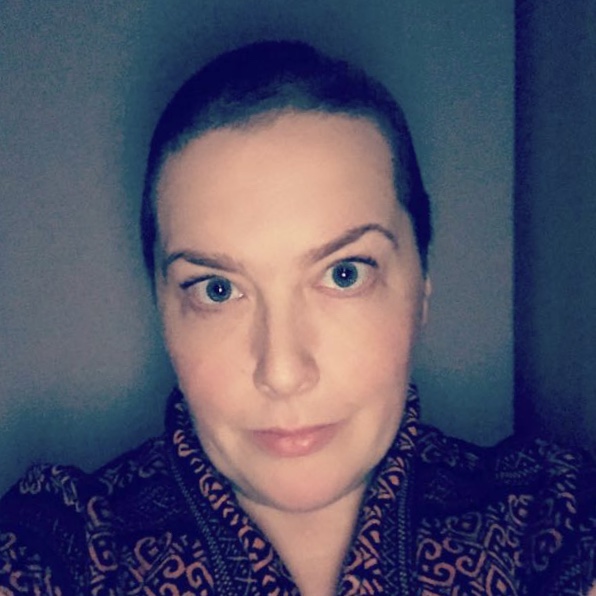 Boot polish touch ups also required for this one. 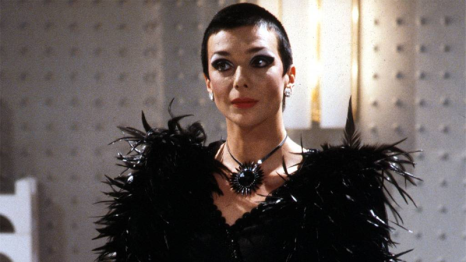 By the Alvin stage, my hair was defying all laws of gravity. Maybe straightening it would make it flop down and stop laughing in the face of Newtonian physics? Nope. We just moved seamlessly to the…. 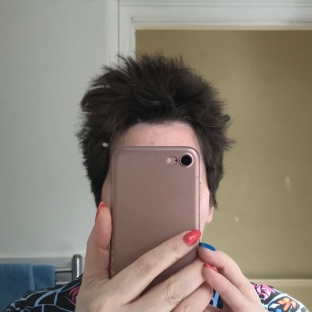 The How Bloody Curly is My Hair?

1 year to the day after what was left was all shaved off.

and finally, what it looks like now. A startling amount of upkeep to look like it was done with garden shears. BUT IT’S HAIR, so I love it.

2 thoughts on “The hairless whispers of a good friend”