This post has been the most difficult to write so far. Not because of the bad stuff, but because of the good stuff. It’s completely overwhelming and I really don’t have the words or even structure to do justice to the feelings involved. You’ll see that from the rambling and lack of any sort of resolution.  So please magnify everything I do manage to express by at least 1000 times and it might at begin to approach the correct emotional pitch.

Many people bear illness with a stoicism and sense of privacy that means they only mention the battle with cancer or double amputation once it’s safely over and done with. Under normal circumstances, my preference would be to behave like that. Keep it buttoned up. Private. Attention seeking is the ultimate sin.  Unfortunately, when it came to the crunch, it turns out I couldn’t keep a stiff upper lip, and the response to that failure has been one of the greatest joys of my life.

From the first visit to casualty, I was posting on Facebook about the experience. This was done more from a need to try and understand what was going on than a desire to over share, I promise. Once the tumour was identified, and still in some combination of shock and denial, I was telling everyone, online and off, in a flippant, incredulous, ‘get a load of this nonsense!’ way, not giving it any real import or weight. Unconsciously, I was desperately hoping that a friend would be able to point out that it was untrue, it’s a all a daft mistake.

Having scared the crap out of everyone, once I had embarked on the path of TMI, I was committed to continue, for better or worse.  Having embroiled people, it’s not fair to leave them on a cliffhanger. However, as I began to accept the gravity of the situation, so it became more difficult to tell people. Bumping in to the family of one of E’s friends, Charlotte, the mum asked how our summer holiday had been. We’ve known each other for the 9 years since our girls started school together, so I’d certainly class us as friends.  “Bit weird”, I replied. “I’ve got a brain tumour!”. She looked dumbstruck. Her eyes filled with tears. “You have?” she asked. (Weirdly this is pretty much everyone’s first question, as if I’m referring to someone else).  Charlotte is a particularly empathetic person, and seeing her reaction to this information made me realise for the first time the impact something like this has on others beyond my immediate family.  Hearing that someone you know, whether very well or just vaguely and tangentially, has a potentially terminal condition immediately thrusts you in to their shoes. Envisioning the effect your own demise would have on those you love. By casually laying bare my mortality, I foist an awareness of their own on to other people.  It’s mean and horrible and I hate doing it. I’m sorry for doing it to you.

What though, is the alternative? Our first question on seeing someone we know is always “How are you?” Should I reply with the state-mandated ‘fine’? I feel fine, and it removes the chance of upsetting them immediately, but risks alienating them later if someone else tells them and they feel excluded or not trusted enough to be told. It’s also so damn hard to avoid, the far reaching effects of the tumour wrap their tendrils around all but the most passing topic of conversation.

Dilemmas about making people cry aside, what has been overwhelming and truly humbling has been the response to my oversharing. People are wonderful. From the most eloquent, heartfelt messages and generous offers of help, to the postman swatting me with a piece of paper and mumbling ‘you’ll be fine, pet’ while looking at his shoes, every response has been beyond valuable in getting us through this time, and appreciated in a way I’m completely at a loss to express.

Lots of people don’t know what to say in these sorts of situations. I’m one of them, and to my eternal shame, have sometimes said nothing for fear of saying the wrong thing; an inadvertently upsetting or distressing thing. The past few weeks have taught me that there is no wrong thing. The simple human contact and empathy is the thing that matters.  It really counts. “What can I do to help?” asks everyone, and they really really mean it. I don’t have a ready response yet, I have no idea what difficulties treatment and illness will bring, but just by asking, and meaning it, you’ve already helped.

Family members have stepped in and sorted out things both big and small that I’m not able to manage right now. They’ve come to simply sit and be with us. Friends have taken the kids at very short notice so A & I can go to hospital appointments. They’ve delivered incredibly thoughtful little gifts like a homemade banana tea loaf and an alcohol free G&T. Messages, calls, cards and even gifts have arrived from online friends, acquaintances, customers, suppliers, professional contacts and people I don’t even know. As overblown as it sounds, it genuinely feels as if this potentially devastating news has reconnected me with humanity and given a rare glimpse of my place it it. How important and loved we all are.

The way people have reacted to my diagnosis has actually made this one of the most positive experiences of my life. So many of us struggle daily with chronic conditions such as depression, chronic fatigue syndrome, fibromyalgia etc etc. The privations and limits placed on life in the long term by that sort of chronic condition, especially those that don’t announce themselves with clear physical disabilities, are no less than the ones that an acute condition brings in a more focused period. I wish that everyone dealing with such conditions could experience the same response I have, and that we could all treat ourselves and others with the same love and kindness. It shouldn’t have taken a brain tumour to teach me this, but it did. Emotionally incompetent, remember? 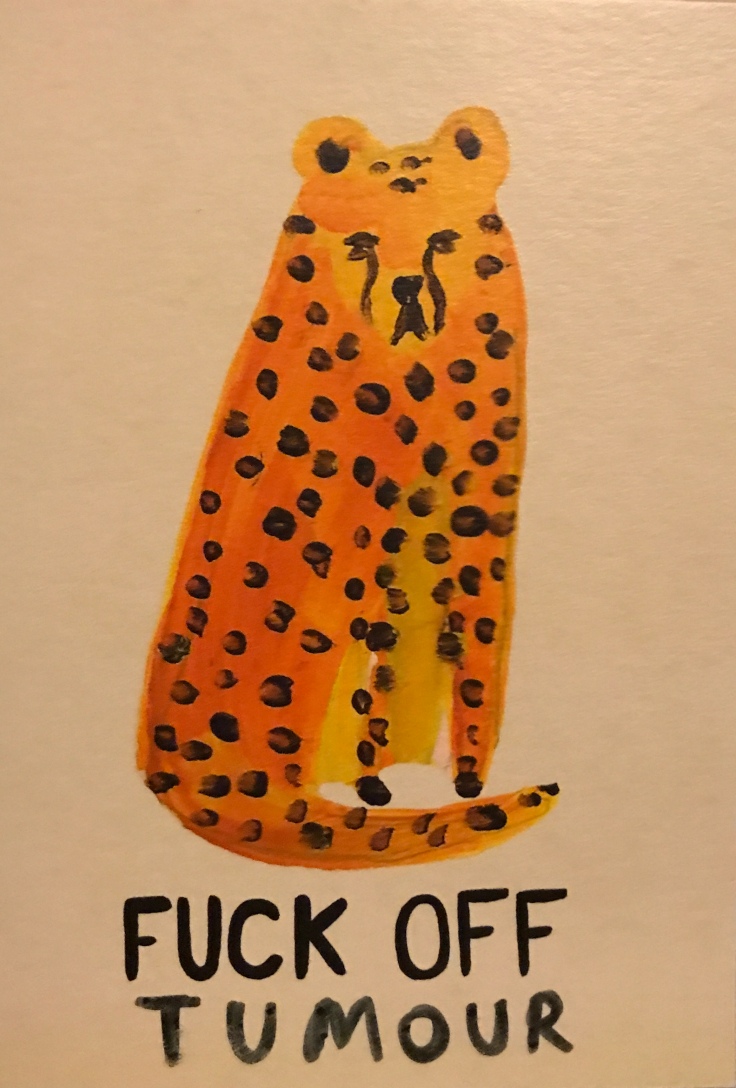 12 thoughts on “The kindness of strangers. And everyone else.”