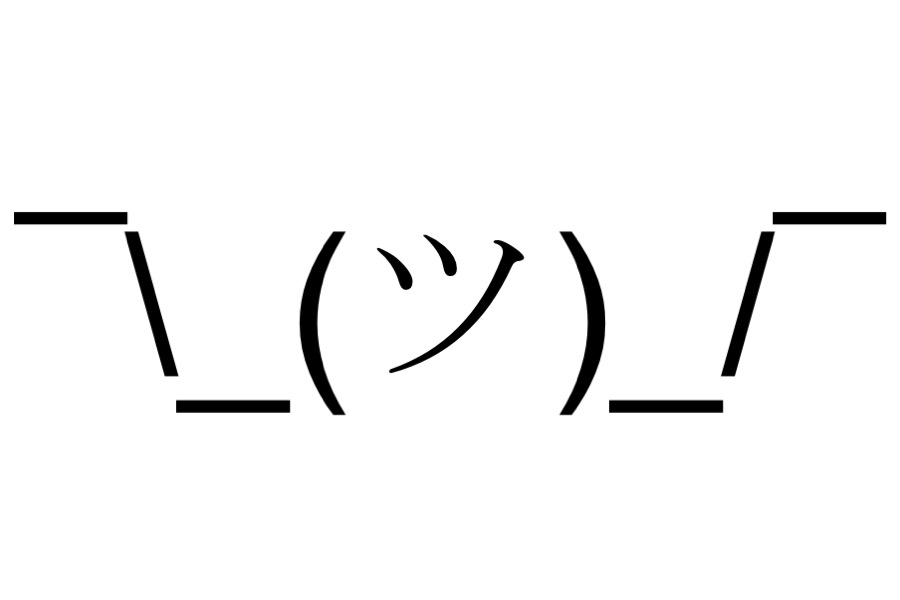 The thing about brain tumours is that there are over 120 types. Granted, adult primary brain tumours tend to be one of a handful of types, but multiply that by all the different places in your brain they could occur, and times that by the age and underlying health of the person who owns that brain and you end up with each case being pretty much unique. No one has walked this exact path before, and most likely no one will walk it again. What this means is that every statistic you read is essentially meaningless, and that there is no certainty whatsoever.

There are lists as long as your arm about what symptoms brain tumours might produce, but they might not. The twitch, personality change or rubbish memory you’ve had for ages before your diagnosis might be down to the tumour. Might not. Might be the normal ageing process, or something else.  Treatment protocols are consistent and rigorous, but the same treatment will affect each person differently. Radiotherapy might cause this side effect, but it might not. You might experience this problem during chemotherapy but you might not. You could have this deficit after surgery, but you might not. If you do, it might be temporary or it might be permanent.  There aren’t even any solid likelihoods or professional predictions to fall back on. Some people do, some don’t. You might. You might not. Sarah, my Neuro-oncology Nurse Specialist has developed a phrase for this in response to the many unanswerable question I and probably other patients have:

It’s an elegant way of summarising all of the above. She doesn’t know. She can’t know, no one does. You might, you might not. Sorry, she’s saying, I can’t promise, or even hint either way. The answer to virtually every question a newly diagnosed brain tumour patient has is basically  ¯\_(ツ)_/¯

Sarah cracked this phrase out during my first appointment with the Clinical Oncologist, Paula. (How Sarah manages to be in all places at all times, I do not know. She’s been at all of my appointments in three different locations, plus I keep bumping in to her in hospital corridors. She also does ward rounds, clinician reviews during treatment and all sorts of other carry on. Maybe she’s triplets?).  Paula is not the oncologist that Damian had said he’d refer me to.  Initially, I was concerned about this as the original consultant sat on the Multi Disciplinary Team, so was familiar with my case if not me personally. Obviously, I needn’t have worried. Paula was fab. With a gorgeous, lilting Northern Irish accent and a straightforward approach, she talked us through the MRI and what would happen next.

Paula admitted she’d missed the tumour the first time she looked at the scan, it’s so small. I like this. Never trust someone who pretends to know everything. They’re bluffing. A professional who can say they don’t immediately understand something, asks for clarification, or admits to the occasional mistake displays an easy confidence in their own knowledge and abilities that makes them far more trustworthy.  Paula’s plan was a ‘radical’ dose of palliative radiotherapy (as opposed to curative; there’s no chance of that) split across 30 sessions or ‘fractions’. They’d be given daily Monday to Friday for 6 weeks. Once done, we’d move to 6, 42-day cycles of PCV chemotherapy.

I’d read that PCV chemo doesn’t make you lose your hair. Is that true?

It’s not a given.

We run through the side effects of radiotherapy. Some are likely to occur during treatment, building up cumulatively a peaking a couple of weeks after it ends. Most likely short term effects are fatigue, hair loss and because it’s the brain, memory loss. Memory processes most occur in the lower half of the cerebral cortex (in dark green below), whereas my tumour is in my motor cortex (in yellow), near the top of my head, just the the right of the dividing line, so hopefully I should avoid this. 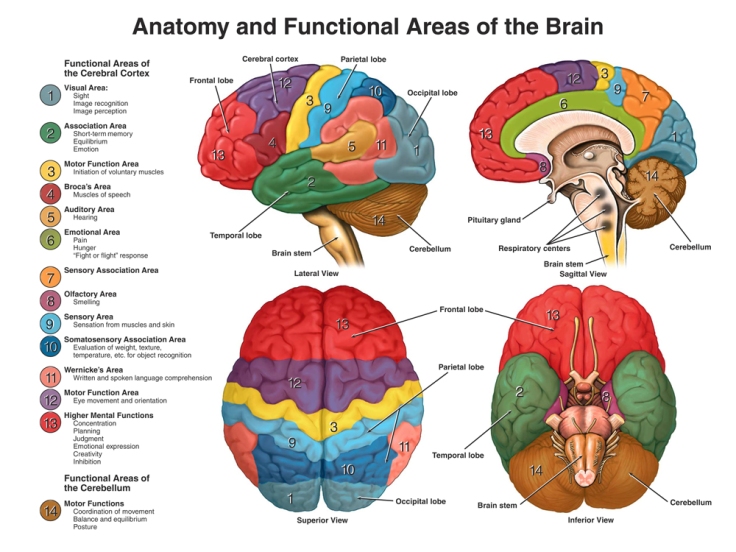 The location of my tumour is a massive stroke of luck in my opinion. Yes, it’s in what another tumour patient charmingly called ‘high quality real estate’ making it inoperable, but any damage I’ll sustain is likely to only affect my ability to move my left side. While I’m quite fond of being able to move my left side, I do have another. I’m right handed anyway.  To me, the intangible functions, such as personality, memory and intelligence are way more important, and I’m so glad my tumour hasn’t affected any of them yet, as far as I’m aware. Some people get tumours in areas that make them aggressive, unable to recognise anyone they know and love, or losing the ability to read or reason. I would HATE that. Worse, a tumour could occur in an area controlling something essential but unconscious, like reminding your heart to beat or lungs to breathe. Now that would be really shit.

The only radiotherapy side effect that really worried me was the possibility of more seizures. Paula agreed.

You’re not the largest woman, but that’s a very low dose of Keppra (anti-convulsant drug). Let’s double it to be on the safe side.

Not the largest woman? What is it with having a brain tumour and everyone falling over themselves to give me unlikely compliments? Paula joins the ‘new best friend’ gang with Sarah.

However, there’s another problem. The NHS has a deadline to move all cancer patients from diagnosis to treatment within 62 days. Despite the fact that I feel like my feet have barely touched the ground since that day in August, Paula says nothing that has happened so far counts as treatment. 62 days from diagnosis is the 15th of October, which is a Sunday. It’ll have to be brought forward. I’m not overly keen on starting on Friday the 13th, and the day before is my birthday.  The 11th of October it will be – 15 days from now. That sounds like ages, but I’ll need to have a mask made to keep my head still during treatment, MRI and CT scans to help plan the treatment and act as the ‘before’ pictures for the cranial makeover, and it takes a full two weeks to plan the treatment, such is its complexity.

Radiotherapy treatments are planned by specialist doctors called Dosimetrists. All the cancer booklets say this, and also say ‘you are unlikely to meet your Dosimetrist’. It’s now my mission to meet one. I imagine them chained to their desks in the bowels of the hospital, churning out hard sums all day. Every so often they’ll beg to be allowed out to meet a patient. No! Bad Dosimetrist, naughty Dosimetrist! You must get on with your sums. FOR TWO WEEKS.

It looked like everything would start to speed up again.